Fish Tales: My Biggest Pike… Yet

“Chasing Northern Pike has been a passion of mine since 1982. A good friend from Canada got me interested in Pike on a trip to Ontario in ’82 and I have been hooked ever since. My passion is not limited to Esox lucius … I love chasing Esox masquinongy as well. I figured for sure I would chalk-up a 50-inch Musky before I got a 50-inch Northern. Guess again.

By a fluke of luck, we fished with Ragnar Wesstrom, at Trout Rock Lodge on Great Slave Lake, in the summer of 2009 after another camp failed to open. Ragnar kept his camp open for three of us who had the problem with the failed camp. And it turned out to be our new “gold standard” for Pike fishing. I have fished a lot of Pike locations …and right now, Trout Rock is at the top of my list.

That first year, my buddy and I caught 775 pike over 9.5 days with 91 fish of 40 inches or better. We were amazed, and have been coming back ever since. There are tons of protected islands, lots of excellent early bays as well as later fishing when weed beds develop. Ragnar runs large custom John boats that are super Pike-fishing platforms, stable and comfortable. And due to the protection afforded by the islands, you can easily travel from spot to spot making good time and not getting beat up doing so.

In late May of 2013 my fishing partner and I went in early for four days of fishing before two other friends arrived for the official start of Ragnar’s season. During those four days we caught 388 fish with 52 fish at 40 inches or better. The “better” included multiple fish in the 47- to 48-inch range. My buddy got his first 50-inch Northern on a small Reaction Strike Fathead Minnow. Plus we saw two other fish in different areas of the waters we fished that made his 50-inch fish look small. In particular, I had a fish up on a “figure 8” at the boat that was not only very long but had the heaviest shoulders I have ever seen on a Pike. It turned itself inside out chasing my large Reaction Strike Fathead Minnow, but wouldn’t eat it! That particular spot was not to be forgotten.

Three days later after the other two in our group arrived, we were back in the same spot and, yes, I had on a large Fathead Minnow. Wham – big hit on a “figure 8” at the boat. I knew I had a good fish but wasn’t sure how long it was. I sorta figured it was a 48-inch-class fish. Our rookie guide cradled the fish, got it in the boat, put the tape on it, and muttered,“ No way!” I had just landed a 51-inch Northern! My musky fishing helped attract the strike. We ”figure 8” Notherns the same way we do Muskies, every cast, without fail, and it paid off! It only took me 31 years, but I got my 50-plus-inch Pike.

That week our group went on to catch 590 fish with a whopping 165 fish of 40 inches or better! And that was with a very cold/ slow day on our last day. It was a week that we have talked about repeatedly since.

The fishing at Trout Rock is great, and Ragnar’s organization, top notch accommodations and equipment, coupled with a super guide staff lead by Jeff Traversy, make it a Pike destination like no other. I will be back up again this year for the season opener – and I will be chasing a 52-incher!”

See what others are saying about Trout Rock Lodge and Aurora Station. 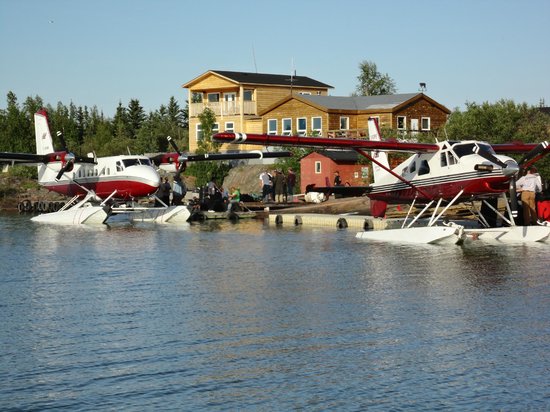 Bobo008
Verified
Aurora viewing and outdoor activities Joined with friends to visit Trout Rock Lodge @ Yellowknife in September, we chosen this place not only because of the accommodation and meals, but also their well experience on day time adventures such as canoeing, fishing, berries picking and hiking. Our 3 nights there were full of fun and laughs as it certainly something new for us come from cities. The last and the most important point was we could view the superb amazing Aurora in all these 3 nights in a wild and open lake area, while our Lodge is just around us. So lucky I picked this tour as it fit perfectly my dream trip with Aurora viewing and wild experience (safe and hassle free ) and would highly recommend this to my friends.
Read more

Fung
Verified
Unforgettable and meaningful The moment we stepped onto the island (Trout Rock Lodge), we said “we have to come back”. The moment we experienced the interesting activity on the island, we said “we MUST come back”. Attracted by the remote location, our original purpose of staying in Trout Rock Lodge was aurora hunting, which proved to be amazing. At the same time, we found a lot of meaningful content by spending few days there: - the island is very remote but has so many meaningful stories behind, thanks to Ragnar for the idea of Trout Rock Lodge - the rooms and cabins of the lodge are fundamental but cosy & comfortable, and most important of all, aurora viewing could be just one step outside - the meals are simple but Rose and Laura made them so delicious - the boating, fishing, picnicking & hiking are typical Canadian activities but Chris’s dedication made these activities so unforgettable and meaningful - he could remember the boating route along all similar landmarks; he could cooked us delicious meal in the wild area using primitive tools; he could remember every single spot of the island including the history & story behind... My husband and I look forward to going back for a winter experience!
Read more

Dori_pingu
Verified
Trip of a lifetime! We had an unforgettable experience joining the 4 days 3 nights Trout Rock Lodge package with Yellowknife Tours. We saw the Aurora Borealis dance above us, caught pike fish on the Great Slave Lake, picked berries and Amethyst gemstones, hiked around lakes and mountains home to the aboriginals... This trip was definitely one for the books! 📖☑️ Massive thanks to all the staff for taking care of us tirelessly, making our stay as comfortable as possible. 四日三夜北極光之旅 , 使我們留下了深刻的印象和難忘的經歷。 我們一家選擇了參加黃刀旅遊的猞猁小築團 (Trout Rock Lodge) , 在寧靜的小島上觀賞北極光 , 是明智的決定 , 除了地理上可 360 度欣賞那千變化的北極光之餘 , 還可享受釣魚樂 , 行山之樂..... 此外工作人員的悉心照料令我們特別窩心啊 !!! 💕 他們十分體貼和照顧我們的需要 , 所以要推薦給大家。👍👍😄😄
Read more

passionfruitsin
Verified
Best Aurora Sighting Site and Winter activities Getting to the lodge itself is an adventure. You need to go across 3 lakes in a tracked vehicle for about a 45 minutes ride. In Summer, it is accessible by seaplane. The lodge is eco friendly and there is no water for most things in Winter including no bath and flushed toilet. A unique toilet system takes away your waste without water. Food is cooked in house by a resident cook and is delicious. She even catered to my wife's non dairy diet strictly without compromising quality. Activities are conducted also by a resident team for ski mobile rides, ice fishing and snow walks. They injected much fun and learning experience into the work. 3 of us caught 6 pike within an hour or so. The Aurora watching was awesome. I have tried Iceland, Finland and Alaska without success. Here no efforts were needed. I sighted the Aurora on all 3 nights with one awe inspiring burst on the last night which lasted for 4 hours. Ragnar and his team give their clients a very good time in the harsh Winter environment and we enjoyed every minutes of our time at Trout Rock although we were out in the wilderness with no other humans in sight except for nature and the wild life. Would I do this again if I have the opportunity? Certainly and I would say that anyone with a sense of adventure, likes fishing or want to satisfy the bucket list of watching the Aurora should be hosted by this great team at Trout Rock led by Ragnar. They placed customer satisfaction above all else and you will surely have a great time as my wife and I had.
Read more

Roxyfly11
Verified
Fantastic staff The Lodge is rustic and very clean, but without running water in the winter. They use Yellowknife Tours, LTD for their logistics and they provide a tour guide who picks you up in town and stays at the lodge. Travel between town and the lodge in winter is over land by van and snow cat. Our guide, Shine, was relentlessly enthusiastic and a hardy companion. Grace was our cook and she not only does that well, but is a completely lovely person. Rob and Chris were the fishing guides and have antifreeze running through their veins. The facilities and nature of the area are fantastic, but what made this place stand out for us was the staff. They are supernaturally knowledgeable and good natured. Cannot recommend highly enough.
Read more

ysllily
Verified
Unforgettable Experience in Yellowknife We spent 3 days in the Lodge last week and have fulfilled many of our first time experiences in such a beautiful winter wonderland. Our top agenda of this trip was to view aurora and Yellowknife did not let us down. We had viewed aurora every night!!! In daytime the Lodge arranged different winter activities including snow mobile, ice fishing and snow walking. Surprisingly we didn't fear the cold being outdoor and enjoyed every moment with the tour, it is so much fun!!! Sincere thanks to the Lodge Owner Ragnar and Team, they are so professional and passionate in running the business. Meals were super yummy, salute to our Best Chef in the Lodge,.... I love your banana cake and blueberry scones!!! Thank you Chris and Robbie for taking care of us on the frozen lake with all those exciting outdoor activities! The Lodge environment is very comfortable and I would really love to visit it again hopefully in Autumn time to enjoy a different experience in Yellowknife!
Read more

Janet J
Verified
Pike fishing This was our first time to visit trout rock lodge and it more than lived up to expectations. Comfortable, clean accommodations. Incredible food thanks to Marla and her crew and our guide was exceptional. The pike are plentiful and HUGE! We had a fantastic time!
Read more

Les D
Verified
World Class Fishing Experience My 6th trip back to Trout Rock Lodge. And again...the hospitality and service was over the top. The trophy pike fishing is ridiculously insane, Marla and her kitchen staff prepared awesome meals, and the guides are all professional and work as a team to make your experience a phenomenal one. Thanks again to Ragnar and his team for another great trip. We will be back... Les Diamond
Read more

dianethomasis
Verified
Fabulous Winter Weekend - Ice fishing, snowmobiling, snowshoeing, dog sledding This was a wonderful way to experience the Canadian north during the winter. We went ice-fishing and were able to catch several large northern pike. We went snowmobiling, snowshoeing and of course the remote location gave us a perfect view of the northern lights. The lodge was very inviting and the staff were amazing. The food was skillfully prepared and delicious. The guides were friendly, knowledgeable and helpful. This was truly an experience that we will never forget.
Read more
Leave a Review